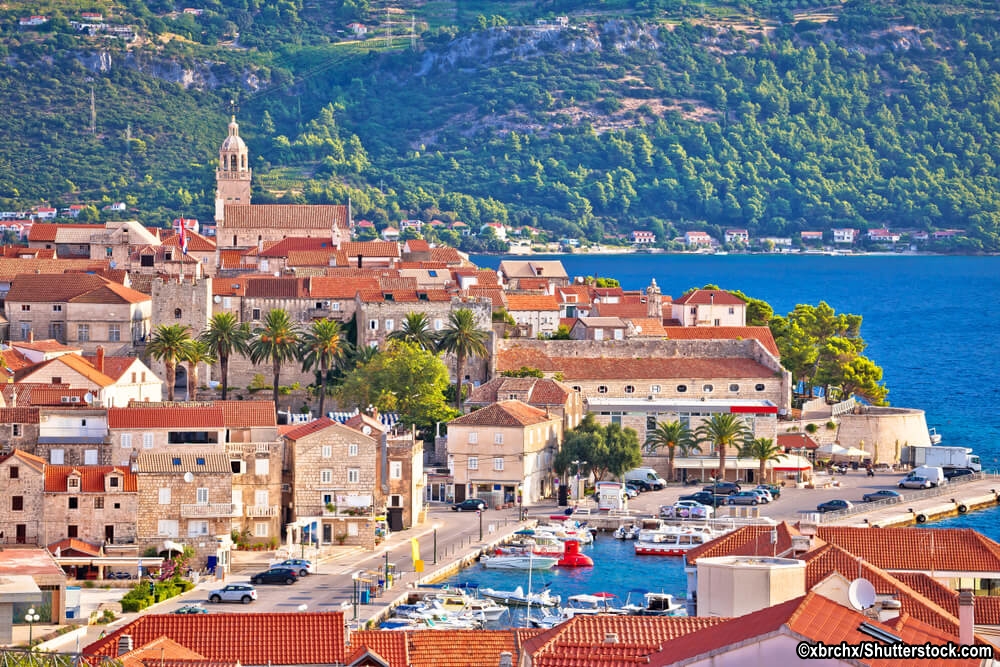 Korcula is a historic fortified town on the protected east coast of the island of Korcula. The old town is surrounded by walls, and the streets are arranged in a herringbone pattern allowing free circulation of air but protecting against strong winds.

The old town of Korčula is one of the best examples of a fortified medieval town in the Mediterranean and is listed in UNESCO’s tentative list of outstanding world heritage sites.

The town’s main historic sites include the central Gothic and Renaissance Cathedral of St Mark, the Town Hall and the massive town fortifications. The world’s greatest 13th century traveller, Marco Polo, who was a native of Korcula, opened the door of the Far East to Europe.

The Revelin Tower from 1485 protects the area between the Arsenal and the Land Gate Tower. The Arsenal of 1572 was built at a time when the importance of Korcula for the Venetian Republic was growing. In the 18th century, Venice wintered its fleet in Korčula. Above the entrance to the Land Gate, there are two symbols marking Korčula’s history: a bas-relief with the winged lion of St. Mark, a symbol of the reign of the Venetian Republic and a stone tablet commemorating the 1000th anniversary of the coronation of the first Croatian king, Tomislav.

It is believed that the greatest traveller and explorer of all time, Marco Polo, was born in Korčula in 1254. On 7th September 1298, the great naval battle between the Genoese and the Venetian armadas took place in front of the town of Korčula. The Venetians were defeated and the Genoese imprisoned, among whom was Marco Polo, who was freed on payment of a large ransom in 1299. In a Genoese prison, Marco Polo dictated his experiences about his journey to China to Rustichelli. These journeys are described in the book “Il Milione”. Marko Polo died in Venice in 1324.

The town museum is located in Gabrielis Palace, which is an outstanding example of 15th and 16th c. residential architecture in the centre of the old town. The exhibits evoke the cultural and commercial milestones of Korčula from prehistory to the present. The collections explain traditional crafts; in particular, stonemasonry and shipbuilding which were of essential importance to Korcula. Among the most valuable exhibits are the bronze pendant of Tiziano Aspetti and an 1819 piano played by Beethoven’s close friend, Edith Streicher. Household objects help to explain everyday life. The old kitchen in the attic makes for a memorable experience.

St. Mark’s Cathedral is the most attractive Gothic and Renaissance building in the old town of Korčula. It was built by local stonemasons in the 14th, 15th and 16th c. with the support of Italian masters. The most famous local stonemason was Marko Andrijić whose masterpieces are in the upper part of the bell-tower and the ciborium above the high altar in the central nave, dedicated to St. Mark, the patron saint of Korčula. The Gothic and Romanesque main portal was built by the Italian master, Bonino da Milano. The southern lateral nave is dedicated to St. James, while the northern one is to St. John, with the adjacent St. Rocco chapel.

Next to St. Mark’s Cathedral, there is a former bishop’s court where the Abbey Treasury is now housed, established by Abbot Ivo Matijaca and the Croatian painter Ljubo Babić in 1954. The earlier bishop’s court from the 14th and 15th centuries was reconstructed between 1860 and 1874.
In this famous museum of religious art, there are many invaluable works by Venetian and Croatian artists. The most significant work is the polyptych “Our Lady With Child and Saints” from 1431 by the Dalmatian painter Blaž Jurjev Trogiranin (? -1450), the most significant name in Dalmatian Gothic art. He resided in Korčula from 1431 until 1435 creating paintings for Korčula churches and teaching drawing and painting. In the wall cabinets, there are numerous documents and books which speak about Korčula’s and Croatia’s distant past. The most notable is the Korčula Codex from 1214.

Documentation shows that the Moreška sword dance has been performed in Korčula since at least the 17th century. Performed only by men from Korčula town families, the mock battle dance with each soldier holding two swords is traditionally performed on July 29 (St. Theodore’s Day) and weekly during the summer tourist season. Dramatic dialogue sets the context for the two armies to do battle for “Bula” (a lovely young maiden), who was abducted by Moro, Arab King. The clashing, sparking swords in seven battles ends with “Bula” being freed from her chains and returned to her beloved Osman, the Turkish King.

St. Anthony’s is half an hour’s walk from the centre of Korcula, towards Lumbarda. As well as of religious interest, it is a protected area of natural beauty. There are 102 steps to the top, bordered by a cypress alley planted in 1708. The summit is crowned by a small 14th c. church dedicated to St. Anthony the Abbot. The hilltop affords a beautiful view of the Korčulan archipelago.

Croatian painter Maximilian Vanka (1889-1963) is an important name in modern Croatian art. He is celebrated as the finest Croatian portraitist in the 1920’s and 1930’s. The collection of Maksimilijan Vanka, along with his house and studio in Korčula, were donated to the Academy of Science and Arts in 1964 by his widow, Margaret Stettin Vanka. The villa contains the Memorial Collection and was opened to the public in 1969. He was a corresponding member of the Academy of Sciences and Arts and a professor at the Academy of Fine Arts in Zagreb, until his departure to the United States in 1934. The collection of Maksimilijan Vanka in Korcula presents a cross-section of his work from the 1920s.

Watch Marko Polo embark on a journey from Korcula, see him in a desert caravan, follow him to the palace of the famous Mongolian emperor Kublai Khan in one of the seven exhibition halls bringing to life his adventures with outstanding set design and realistic figures.

Seascape Beach House Korcula is situated in a private little bay surrounded only by nature and sea, 6 kilometers from the town of Korčula. Peaceful Mediterranean surroundings and one of the worlds cleanest seas is waiting for you!

This website uses cookies to improve your experience while you navigate through the website. Out of these cookies, the cookies that are categorized as necessary are stored on your browser as they are essential for the working of basic functionalities of the website. We also use third-party cookies that help us analyze and understand how you use this website. These cookies will be stored in your browser only with your consent. You also have the option to opt-out of these cookies. But opting out of some of these cookies may have an effect on your browsing experience.
Necessary Always Enabled
Necessary cookies are absolutely essential for the website to function properly. This category only includes cookies that ensures basic functionalities and security features of the website. These cookies do not store any personal information.
Non-necessary
Any cookies that may not be particularly necessary for the website to function and is used specifically to collect user personal data via analytics, ads, other embedded contents are termed as non-necessary cookies. It is mandatory to procure user consent prior to running these cookies on your website.
SAVE & ACCEPT